Hey! So I actually did it! I moved 500 miles from everything I know to Sandpoint, Idaho. I just got my internet set up a few days ago, so I figured now was an appropriate time to put up a post. I've done my nails and some friends nails since I last posted, so here are all the pictures. Sorry that I haven't been doing them one at a time with explanations, I've just got a lot going on and can't always get to it. BUT, I'm going to do my best to be better.. :)


These are Ashley's nails. She wanted something a little bit different but has loved the zebra print so much that she didn't want to steer away from it. :) So we changed up the colors a bit. Reminds me of watermelons. 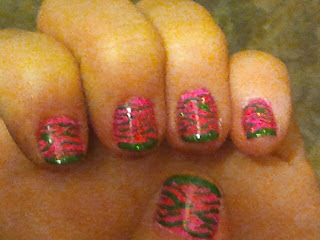 Watermelon Zebra
Ashley asked if I'd do her friend's (Aimee) nails too since I'd be moving the next day and she knew it'd be a while before I could do her nails agian. I agreed. Aimee wanted cheetah print. I'd never attempted the cheetah before but kinda knew the basics, so I agreed and the outcome was awesome! 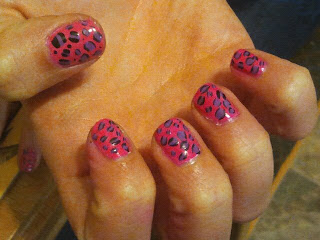 Cheetah Print
Next is Destiny. She might as well be my sister. :) She lives up here in Sandpoint and asked me to do her nails many times. For her first time, I asked what she'd like to have done, and she said she saw my pandas and would like the same. I agreed and here is the outcome... Panda's with bamboo
Cassie is Destiny's sister, which in turn is like my other sister. ;) She, too, wanted her nails done, and wanted a french mani. I asked if she wanted a design and we came up with the bursts. She picked yellow and black as her colors, but the yellow didn't show as well as we'd hoped. 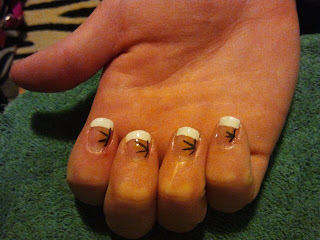 French mani with bursts
For Halloween, Destiny wanted to be the cookie monster. While I was still in Boise, I came up with a nail design for her costume :) Here's the turn out: 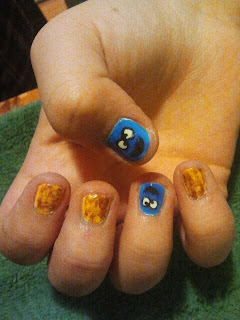 Cookie monster!
And finally I got around to doing my own nails, after having the previous nail polish almost completely chipped off. lol. I wanted polka dots. I couldn't quite decide on a color but I wanted them bright. So I did the rainbow of neons on white. Rainbow polka dots
I'm definitely on a new adventure here in Sandpoint, and so far, it's been pretty good. I miss my family and friends in Boise, but this week I'll be making a road trip down for my sister-in-law's babyshower! Yay for my new nephew making me an aunt! :)) Hope you enjoyed the pictures. Until next time...
Posted by Preciousck4330 at 2:21 PM

Preciousck4330
The current status of my life: ~I am 21 years old ~I have a dog named Lily. ~Music is my passion. ~I love to dance in the rain. ~Honesty is the key ingredient to EVERYTHING. ~Painting my nails has become a new hobby... or OBSESSION!