I do nails for one of my friends, Ashley. She looked at my pictures i have posted and asked if I could do the zebra print for her. Well, the zebra print that I had done, wasn't really MY creation, it was the Sally Hansen Salon Effect, so.... I told her I would try doing it freehand and see what happened. Well guess what!? It turned out BETTER than the Sally Hansen! I was so excited, so here's what i did...


I did a base coat of Seche Clear. Then two coats of China Glaze White on White. After the white dried, I took my Black Stripe Rite and did free hand random lines and "V" shapes until the nail was covered, then did a black tip. To make it sparkle a bit I added one coat of China Glaze Fairy Dust. And to top it off, used SV for the quick top coat. I was pretty impressed at how awesome they turned out! 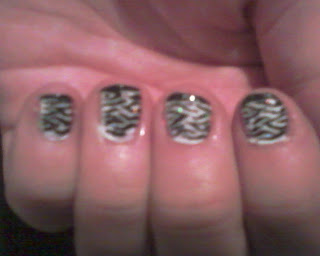 Preciousck4330
The current status of my life: ~I am 21 years old ~I have a dog named Lily. ~Music is my passion. ~I love to dance in the rain. ~Honesty is the key ingredient to EVERYTHING. ~Painting my nails has become a new hobby... or OBSESSION!